CNN, BBC, ABC, CBC all reported on YouYou Tu (or Tu YouYou in

Chinese) who is one of the 3 scientists to win the 2015 Nobel prize for medicine to cure malaria and parasitic diseases.

Here is some excerpt from CNN news reporting:

Derived from sweet wormwood, its use as a treatment for malaria was first recorded in 1600 years ago in China, when a manual recommended drinking juice extracted from the plant.

Her discovery resulted in the drug artemisinin — humankind’s best defense against the mosquito-borne disease, which kills 450,000 people each year.

On Monday, she was one of a trio of scientists awarded the Nobel Prize for medicine. 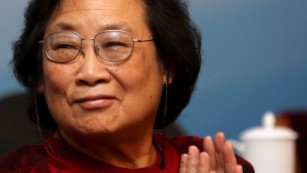 “Many people… would have dropped and looked for other things but she pereserved until she had something that worked 100%,” Miller told the Lasker Foundation, which awarded Tu America’s highest medical accolade in 2011 — the Lasker-DeBakey Clinical Medical Research Award.

Since 2000, more than 1 billion artemisinin-based treatment courses have been administered to malaria patients, according to the World Health Organization, contributing to the successful control of Malaria in several endemic countries. 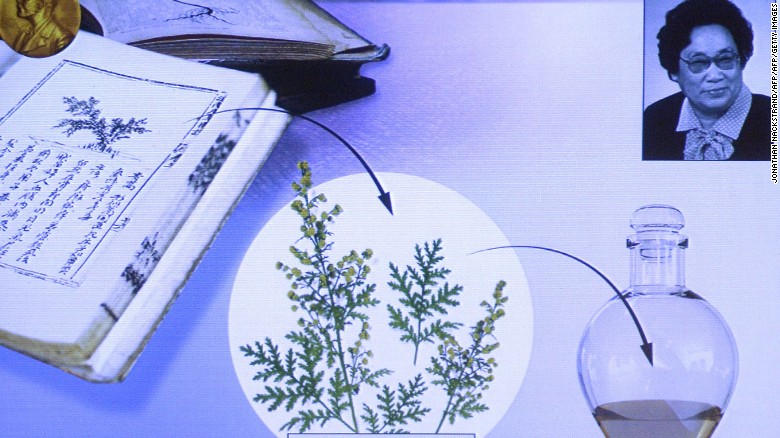 China’s Youyou Tu and an illustration describing her work are displayed on a screen during a press conference of the Nobel Committee to announce the winners of the 2015 Nobel Medicine Prize on October 5, 2015.

Today, artemisinin compounds form the backbone of malaria treatment and are used in combination therapy to reduce the risk of the development of resistance. Although its success means that there’s a risk of resistance problems resurfacing again.

“The discovery of artemisinin was an example of successful collective efforts,” she told Xinhua, China’s news official agency. “It’s a gift that traditional Chinese medicine has for the world.